When deciding to live outside your own country, as an expat, you can expect to undergo a certain level of culture shock. Moving from America to living as an expat in China has given me quite a many reverse cultural shock experiences. You will hit hard with reverse culture shock depression when returning back to home.

What you don’t expect is something called Reverse Culture Shock. It’s when you get so used to living abroad that going back to your home country feels strange and foreign to you. This is something I experience every time I travel back to the States while living in China as an expat.

Going back to my home country is now a big deal. Like expatriation, repatriation is always unexpected and makes you feel the reverse culture shock depression.

What is Re-entry or Reverse Culture Shock?

When you came back to your home country after a long time, you feel psychological isolation and depression. Returning home is not as cheerful experience as you might have expected.

Culture Shock is what you feel when you first move to abroad for studying or another work. While staying so long you adopted the culture of a foreign country. The students who are studying abroad face with reverse culture shock depression the most.

I’ve been living as an expat in Shanghai for almost 7 years now and have gone back to my home country a total of three times in those 7 years. Each time, I notice something new and strange that I didn’t notice before. It’s odd feeling like a stranger in your own country, but that’s how it feels.

I recently traveled back to San Diego for a couple weeks over the summer of 2018 and from the moment I stepped off the plane in LAX, I was bombarded with a strange sense of being in a foreign place.

It’s a total reverse cycle. I am missing my expat life. 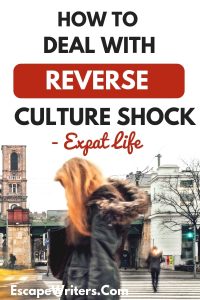 What are the stages of Reverse Culture Shock Depression?

At first, you are so excited to meet your family and friends which is also called a honeymoon stage. You are eager to meet your dear ones after so long time. But such cherishable moments last just for 1-2 days. Eventually, you are caught up with re-entry culture shock. The repatriation depression catches you up and now you are into “crisis stage”.

In the crisis stage, you might feel an emotional imbalance. Mostly this lead into 3 major feelings: Confusion, Loneliness, and Exhaustion. This was really hard for me to deal with reverse culture depression.

In Shanghai, I get it. I know what to do and where to go, even at the airport although we are expats. But in America, I felt an instant rush of confusion.

Everything was in English, yet I felt a strange sense of not know where to go or what to do. I had to ask several people where to catch my connecting flight to San Diego. And oddly enough, that was what made it confusing. I actually could ask someone where to go.

In China, it’s difficult when you don’t speak the language, but I’ve come to accept that. I know how to find my way around without having to ask someone. At LAX, it was the opposite. Following signs didn’t make sense. I had to ask for directions several times just to get where I needed to go.

And this was just the beginning.

Buying vegetables at an American supermarket was also confusing. I couldn’t, for the life of me remember how it was done. In China, you pick out your vegetables, stand in line for about ten minutes to get them weighed and priced, then you can check out.

In America, you just pick out the vegetables and they weigh/price them right at the checkout. I was so confused, I think I spent ten minutes just wandering around the store looking for the place where to get them weighed/priced.

Checkout was perhaps even more confusing. In China, we pay for things using an app on our phones, either Wechat or Alipay. All you have to do is scan a QR code at checkout, type in your bank code, and it automatically transfers money from your bank account to whoever you’re paying. Easy, right? Not in America. People actually use cash. Yes, CASH?! Seriously, why does cash still exist?

While I was there, I noticed a strong sense of loneliness. Sure, people would always ask questions like “How’s China?” But they really don’t have any desire to listen for longer than a few minutes.

I found it difficult to talk to people about my life in Shanghai and most of the conversations I was dragged into made no sense to me.

People would say things like “Oh, you know, that guy from the Ford commercial.” Yeah… I haven’t seen American commercials in years… Or someone would mention something in pop culture that I was completely clueless about (it’s hard to keep up with that sort of thing when you live in a foreign country).

Things like drinking tap water, personal space, saying excuse me were all things I had to make a conscious effort to remember. That effort is mentally exhausting.

I felt tired all the time just trying to remember how things were done. For example, I had to constantly remind myself to give people space when standing in line.

In China, the concept of personal space doesn’t exist. It’s perfectly acceptable to push people out of your way or stand really close to someone in line (if you don’t someone will cut in front of you). Also, saying things like excuse me doesn’t exist. There is a word for sorry, but it doesn’t convey the same sort of meaning as excuse me.

What makes culture shock so difficult is that you have to be conscious of all these new changes you’re faced with on a daily basis. It can be mentally draining. But everyone, to an extent, expects a certain level of culture shock.

What you don’t expect is the reverse – when you’ve lived in another country for so long, everything in your home country seems foreign.

The very moment I got back to Shanghai, I felt at ease – like I was home. Little things like hearing the language (though I don’t understand it) or forcing my way on a crowded metro were things I’d actually missed when I was in America.

So remember, if you’re an expat who’s lived in another country for a while, expect at least a little reverse culture shock when returning to your home country.

How to deal with Reverse Culture Shock Depression?

Dealing with unknown feeling is hard to explain and you must try to speak with others about this matter. Below are useful tips for the people who feel reverse culture shock depression after coming to the home country.

Stay connected with your friends while returning back to home

As an expat, you will make a new group of friends abroad. Try to be connected. Talk at least once a week. Talking to your friends is always the best thing to recover from this shock.

As I mentioned above, while living in China I was used to local culture and ethics. Now after coming back to America, sadly I am missing that culture. So you can read the local news on TV or mobile. Even you can enjoy Tv shows or movies which can instantly lift your mood up.

Be a tourist in your hometown

Now, after living in China, America is new to me. I am now trying to explore my hometown as a traveler. Going shopping, visiting local attractions is a really fun thing. Rather than sitting on a sofa you must come out of your isolation and explore the local area.

What you are missing most from abroad? You can find similar activities like hiking, theater even can find the same food which will relive your memory. I sometimes make the local Chinese food which will make my family so happy.

Give time to be resilient

Give some time to yourself to settle down in a new culture. Every change will create a dilemma in your life. So take change as a new opportunity and feel gratitude about a new thing in your life. You will learn to cope up with re-entry culture shock as time passes. Don’t feel panic and have resilience for this experience.

So, this is my story about how I am hit hard with reverse culture shock. Are you living an expat life?

How do you feel about repatriation depression while living abroad and come back to your homeland?

Have you ever been into this situation? I am so excited to hear about your experiences.

Cynthia Fetherlin is an American expat who’s been living in Shanghai, China for the past 6 years. She’s a full-time teacher, blogger, and soon-to-be new mom. She enjoys hiking in the mountains, scuba diving, snowboarding, and anything else adventurous. Be sure to check out her blog at www.frugalfinch.com for frugal tips on travel, lifestyle, and cooking.