There are some scientific reasons why in a so-called Men Vs Women fight, women will win!!! Who is better – Man or Woman? Girls, this will be a never-ending discussion and I think I have to sideline my feminist approach.

But seriously when I ask are you happy as a woman? Most women would say NO. Why? Because society is biased. We have so many responsibilities. We don’t get equal opportunities or equal pay. We as a female always criticized. I just have worn out. Many many complain!!!

What are the major advantages and disadvantages of being a woman? Well, being a female you might find MANY problems. But how do you feel If I say you should proud of being a woman? The immediate reaction is How? There are some perks of being a woman, you never know. No, I am not talking about how girls can use their charm to impress boys and don’t pay bills.

I think I could write many articles about how women are not treated equally as men. But here, I don’t want you to feel sad about it and want to give a positive thought.

Thoughts are the most interesting thing in this world. Sadly we use that power in a wrong way. It’s tough to sidetrack all your negative thoughts and think positively.

A challenging task to do!!!

It’s not ranting about what you don’t have; the type of unfairness woman face. But you are here to celebrate what you have.

Let’s try to explore and know some phenomenon reasons why you should not regret being a woman and truly agree on women are better than men.

7 Surprising Reasons Why Women Are Better Than Men

1.  Women have a better choice in style and color

Undoubtedly, mostly all women have a great interest in fashion. Variety of clothes available to us, what about men? They have Jeans, Shirt, T-shirt, Pants nothing much more. Men’s fashion is too boring!!!

Look into women’s fashion and accessories list, never-ending. There are numerous reasons for not having a boyfriend but if you happen to have one then you can wear his clothes too!!!! There are much more design and colors. A woman can easily identify 23 shades of red. So we always have a better choice of design and color.

2. Women can handle stress much better

There is no social issue if a woman cries publicly. But Men have a bit ego that they pretend to be strong enough even if they are broke down emotionally.

Female might be considered not so strong as Male. But crying is the best stress relieving activity. So Women fight better than Men over the emotional breakdown. Men generally move towards drug use and other addictions. But we women can easily cry out, feel relaxed and handle our bad time gracefully.

Men’s brain size is bigger than the Women’s brain. Well, elephants have bigger brain according to the skeleton but they can’t be considered more intelligent than a human. So brain size never relates to intelligence.

If you are not a science student, let me tell you we all have 2 sides of the brain – Left & Right. Left side brain performs logical/rational tasks. While the right side of the brain is correlated with emotions more.

Men use their left side of brain majorly to act on any situations. But women use both the sides of the brain. Women have larger Corpus Callosum which allows transfer of data between the left and right side of hemispheres so fast.

Now you got it why we are so emotional?!!!

Next time, when you hear that woman is not so intelligent tell them that woman use the whole brain but Man uses only one side!!! So our brain works more efficiently than men.

4. Women are the best survivor. We have better DNA!!!

Human’s DNA structure is made of X and Y chromosomes. Women have XX and Men have XY. So women have a double copy of each gene, that directly means we can recover faster than men to any panic attack or diseases. Men are on higher risk because they don’t have a backup. Shocking truth!!!!

So male are genetically more dispensable than female. This makes women survive better in any crisis specifically genetic disorders than men.

This is not totally proven but Males are more likely to die than females while in the womb. This is still a controversial point. But a girl has more fighting spirit so they can survive in a difficult pregnancy.

Did you know this? Well, women have many accolades just stick to this article.

Women can learn any language faster than Men because women are more focused on words and sounds. So women have better communication skill than men.

Women are more intuitive than Men. A mother can easily hear or feel if her baby needs her than a father.

Men are majorly inclined towards task oriented but women have more observation skill. Every woman remembers the color of the dress last Friday she wore.

Women typically have a larger limbic system than men, which makes them more in touch and expressive of their emotions. Men have a hard time to express themselves verbally. So women are better than men in expressing emotions.

Females are always good at communicating than Males.

A woman plays a different role, a daughter, a wife, a mother, an employee, a boss. Society wants us to do best in each of roles. There is an immense pressure on each woman to do best in each role of her life. While men are exempted.

But women are born managers. A woman can handle a kid’s tantrums and a pile of office work together. She leads in every home. She is the one who turns the house into a home.

How are you feeling right now? Good? You should.

I know there are many insecurities and expectations we live by as a woman. But there are also some perks we have as a female.

There is no comparison between man and woman. We as women never compete with men because we should know we are BEST!!!

All we want is to bring a smile back on your face. A happy woman always makes a happy family which leads to a happy world.

Remember nobody can put you down if you accept it. You are born with a better quality. Woman have a privilege to give a birth. Because we as woman are real creator of this world.

Feel proud of yourself.

I hope you enjoyed this article so don’t forget to write your views in the comment. Would you like to add more points? We are waiting to include more so just write down in comments.

Share this for sure as you are spreading a positive message to all women around you. 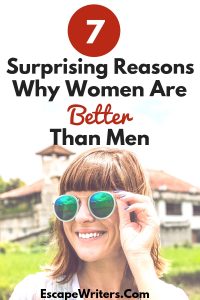